Part of your role as an employer is following payroll laws and ensuring your employees are accurately paid for their wages and other rates, like overtime. If you’re a Virginia employer, buckle up, because there’s a new overtime law in town: The Virginia Overtime Wage Act. Get to know all the facts about the Virginia overtime law before it goes into effect this summer.

The Virginia Overtime Wage Act (VOWA) was signed into law on March 31, 2021 and is set to go into effect on July 1, 2021. The Virginia overtime law creates new hours and wage requirements for employers in Virginia. VOWA also includes a number of protective measures for employees.

Before the law was passed, Virginia did not have its own overtime pay statute. Instead, employers in Virginia had to follow the federal Fair Labor Standards Act (FLSA) regarding wage and hour requirements for employees.

As a brief recap, the FLSA protects employees by establishing:

For a long time, Virginia employers had to use FLSA guidelines when calculating and paying overtime wages. But now, the Virginia Overtime Wage Act is taking over that role.

How does the new Virginia overtime law work?

Although the VOWA has some similarities to federal FLSA requirements, it deviates from the Fair Labor Standards Act in certain aspects.

Like with the FLSA, the new law for overtime pay in Virginia still requires employers to pay eligible workers an overtime rate of at least 1.5 for hours worked over 40 in a workweek.

The VOWA also incorporates most FLSA exemptions by excluding certain workers from overtime. However, the VOWA expands the definition of a covered employee, allowing some workers typically exempt from overtime under the FLSA to be eligible. To ensure you do not misclassify an employee under the new law, double-check that employees not currently receiving overtime are still excluded under the VOWA.

Under the new Virginia wage and hour law, there are a few changes employers need to know. Here’s how the Virginia overtime rule differs from the federal regulations:

Method of calculating the regular rate of pay

Like the FLSA, the VOWA generally requires employers to pay nonexempt employees an overtime rate of 1.5 for hours worked over 40 in a workweek. However, how you calculate the employee’s regular rate of pay can vary under the new law.

The legislation states, “[F]or employees paid on an hourly basis, the regular rate is the hourly rate of pay plus any other non-overtime wages paid or allocated for that workweek, excluding any amounts that are excluded from the regular rate by the federal Fair Labor Standards Act, 29 U.S.C. § 201 et seq., and its implementing regulations, divided by the total number of hours worked in that workweek.”

Until the state issues further guidance on overtime calculations, employers may want to do the following for nonexempt salaried workers:

For remaining nonexempt salaried employees, employers must update the method for how they calculate regular and overtime rates to comply with VOWA rules by July 1.

The FLSA’s statute of limitations is two years if unintentional and three years if the employee can prove the violation was willful.

Under the new law, this defense is not available for employers, and liquidated damages are automatic. All overtime wage violations are subject to double damages. Employers may face greater liability for misclassifying employees as exempt. And under the VOWA, “knowingly” failing to comply with the law can result in treble damages.

Virginia law typically does not allow class or collective actions (e.g., a group of employees sue their employer for overtime wage violations). However, the VOWA makes an exception to this rule.

With this change, Virginia employers could potentially have to defend overtime violation claims of multiple employees in a collective lawsuit.

When does it go into effect?

What else do I need to know about the new overtime law?

Again, the new Virginia overtime law requires time-and-a-half pay for overtime hours. Because of this, any half-time pay rates to compensate workers for overtime may potentially be illegal under the VOWA. This might include:

Although courts still need to interpret the law to determine what’s legal and what’s not, Virginia employers may want to consider eliminating the above types of rates in the meantime to be on the safe side.

Stay tuned to find out how the courts interpret the law and what you cannot do under Virginia’s new overtime law. 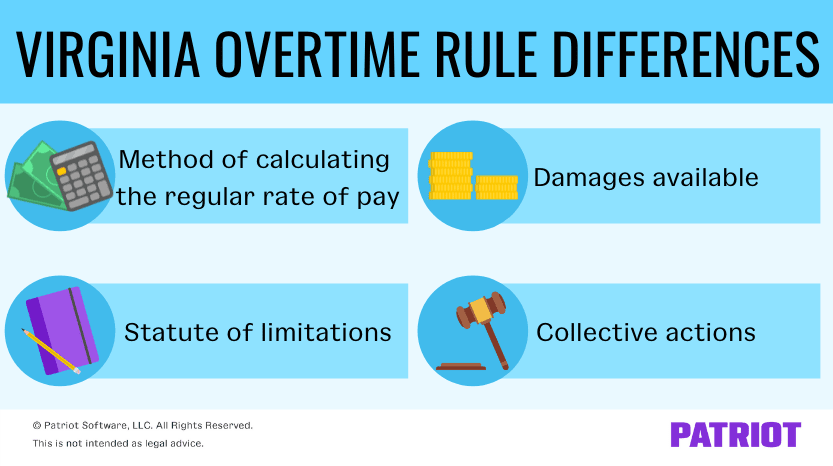 How to calculate Virginia overtime rates under the new law

Say you have a nonexempt salaried employee with a weekly salary of $1,000. To calculate the salaried employee’s regular rate of pay under the Virginia Overtime Wage Act, use the following formula:

The salaried employee’s regular rate of pay is $25 per hour.

Say the same employee worked 45 hours during the workweek. To calculate the salaried worker’s overtime rate, multiply their regular rate of pay by 1.5.

The employee’s overtime rate is $37.50 per overtime hour.

Calculate the employee’s overtime pay by multiplying their overtime rate by the number of overtime hours for the workweek.

To calculate a nonexempt hourly employee’s regular rate of pay, use the same method as the FLSA.

Say your nonexempt hourly employee makes $20 per hour and worked 50 hours during the workweek. They also received a $100 bonus during the period. Here’s what the employee’s regular and overtime rates would be:

The hourly employee’s regular rate is $22 per hour, and their overtime rate is $33 per hour.

Wowza, that’s a lot of information to digest. Luckily, we summed it up for you all right here. Check out some fast facts about the new Virginia Overtime Wage Act:

For more information about Virginia’s new overtime requirements, consult the state and review the legislation.

Calculating overtime doesn’t have to be a hassle. To simplify the process and easily record, calculate, and pay your employees, use Patriot’s online payroll. What are you waiting for? Start your free trial today!